(i.) Tape Echo: Of course Magneto can generate all kinds of vintage Tape Delays via its Low Cut, Tape Age, Wrinkle and Wow and Flutter controls. Each of its heads has individual playback head level and feedback controls. But in addition…In SHIFT mode, Magneto creates up to four separate rhythmically pitched delays by changing the playback speed of each of the playback heads. Head 1 plays back up one octave and a fifth at 3x speed, Head 2 plays up one octave at 2x speed, Head 3 plays down one octave at half speed (creating deep bass sounds), and Head 4 plays quarter note repeats with no pitch shift. Use SHIFT mode to make things bigger and deeper, and to add melodic and rhythmic content. In SHIFT mode, Magneto is also easily configured as a powerful zero-latency sub oscillator: Just run your gate signal to the Restart CV input and blend in only Head 3 with the DRY signal. Want to just let Magneto continue to generate a soundscape while you play with some other modules? In ECHO mode or LOOP mode, just press the INFINITE transport button at any time to disable the Record head and allow Magneto to continuously play the most recent delay cycle or loop length audio. You can also engage INFINITE and use Magneto as an oscillator.

(ii.) Looper: Just like some classic moving head tape echo machines, Magneto gives you a Sound on Sound mode (LOOP Mode). When you enter LOOP Mode, the machine is already recording, just like a traditional tape echo machine. Tape head 4 is the looper playback head while tape heads 1-3 provide delay repeats for the incoming signal. To set the length of your tape, press Tap once to set your splice

“in” point, and press Tap again to set your splice “out” point. All of the tone shaping knobs are active and affect your loop as it plays back and re-records. Press Tap a third time to completely erase the tape. The REPEATS knob controls regeneration strength. Set lower REPEATS level for loops that evolve over time. The maximum loop length is 15 seconds at max SPEED, or two minutes at minimum SPEED.

(iii.) Phrase Sampler: for recording a loop that is the length between two taps of the TAP button. Just press the TAP button once to start sample recording, again to stop recording, and a third time to clear the sample memory. You can trigger sample playback with the RESTART transport button or via the RESTART CV input. The Speed knob or Speed CV determines the pitch and speed of the sample playback.

• Reverse: In ECHO mode, the entire tape contents (not just the current delay time) are played backwards when you press Reverse. This allows for some very trippy effects when playing back sections that included SPEED manipulations or PAUSE events. In LOOP or SAMPLE modes, the loop or sample length will play in reverse. You can continue recording new audio to layer with the reversed audio from the tape.

• Stereo Operation and three stereo head panning options: even if everything else in your rack is mono, plug into Magneto’s left input and enjoy instant stereo gratification. Each of Magneto’s four playheads can have their outputs panned hard left or right (or center). There are three pan modes: LRLR, LRRL, and (customizable) Center. With all heads centered, a psycho-acoustic stereo image is produced. Adding Wow and Flutter or the built-in Spring Reverb further enhances the stereo field.

determined by the SPEED/PITCH setting (knob or 1V/octave CV), and the LOW CUT and TAPE AGE knobs. Press the INFINITE transport button to capture a particular tonality. Switch to Pitch Quantize mode and as you turn the SPEED knob, Magneto will play within any of 15 selectable scales.

• Independent Spring Reverb; Some classic tape echo machines included small integrated spring reverb tanks tuned to limited bandwidth. Magneto captures this vintage vibe while creating a flexible, beautiful spring reverb that stands on its own, in addition to enhancing delayed signals. The reverb circuit’s gain structure is designed so that when pushed hard, it will ‘trash up’ nicely to hold its own with the funkiest lo-fi units, but when the input level is backed off, the reverb has a gorgeous, gentle character that enhances even subtle passages in a sophisticated and spacious way.

• Input record level control means that Magneto delivers not only the warm, luscious delay signals that tape delays are known for, but also high degrees of saturation. Turn up the Record Level knob to send a hot signal to the record head for any amount of tape saturation you desire. Turn up the Tape Age control for warmer repeats. Magneto adds organic heart and soul to the sound of your modular system. 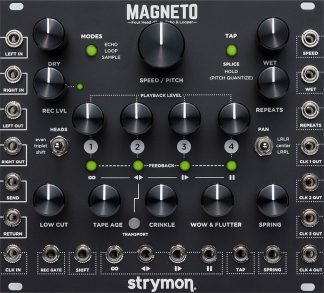