The MeloDICER is Vermona’s vision of a sequencer with the perfect balance between stochastic and deterministic creation of rhythm and melody. Its algorithms generate random values that magically turn into musical events.

It can generate its own tempo using the TAP button or it can be synced to an external clock source.

The rhythm section has four controls labelled with Note Value, Variation, Legato and Rest, allowing to manipulate the length of the notes, their duration and placement in the pattern. With the Rest knob, the meloDICER randomly adds musical rests to the pattern.

The semitone probability faders which are labelled from C to B set the probability for each semitone to appear in the pattern. As a visual support, the faders’ LED goes on for the duration of the corresponding note.

The overall output range of the meloDICER is up to five octaves which is controlled by the two Range faders, allowing to set the lowest and highest note separately.

With each press on the DICE buttons, the meloDICER generates new random values for the rhythm respectively the melody section. We call that behavior dice-mode. The counterpart of dice-mode is realtime-mode. Press and hold one or both DICE buttons for a second until the corresponding LED goes off. In realtime-mode, there is no repeated pattern. MeloDICER continuously generates new random values, based on the parameters you set for the corresponding section.

The encoder allows to control the pattern length by setting the first and last step, and to store up to 16 patterns.

Furthermore, the Melodicer features two quantizer modes, allowing to work as quantizer for external CV signals. The faders of the melody section define the scale. 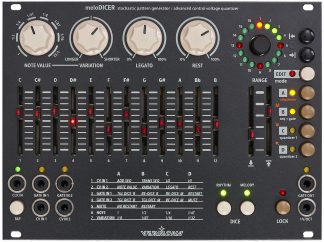