Consisting of two identical channels Lúbadh allows you to instantly record, playback, overdub, trim down, scan through and pitch up or down any audio signal. The two channels are normalised to each other via a feedback path allowing you to manipulate and resample audio to build up complex looping compositions. An optional delay mode allows you to shift the timing of these two channels within the feedback path to create tape delay type effects, with delay times up to 3 seconds.
Inspired by the aesthetics and mechanics of early tape techniques each channel features an analogue input circuit which adds slight compression, filtering and saturation. On
the first recording the sound may appear slightly fuller and warmer, re-recording audio back and forth will compound this effect over time allowing you to create dense tape like textures.
Features
• 2 channel looper
• 96kHz/24bit recording (32 bit internal processing)
• Tape response inspired analogue input circuit
• LED display for playback speed, length and position
• Six minutes record time per channel (more than 450 feet of 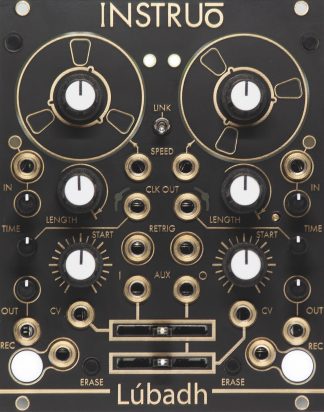