Based on a 30 year old Japanese drum machine

At the core of the DrumDokta2 is the same analog sound engine from the original DrumDokta module which itself was based on a 30 year old Japanese drum machine. The original had a rather grungy “electro” sound and the DrumDokta2 is no different in this regard, but with some added controls and extensions over the voice parameters the sound can be taken beyond the original unit. As with the originals the DrumDokta2 inherits cool things like the ability to accent notes after they have been struck. We’ve also added a powerful sequencer with trigger outs and vactrol distortion and limiting to make a complete drum solution in a small package. You can use it standalone or as a compliment to an existing drum setup or a combination of both, the choice is yours. What we have ended up with is a modern polyrhythmic drum module with vintage tone, charm and character. The original DrumDokta idea started since I was often using more than 50% of my modular just to make drum sounds. Sure there were already drum modules on the market but most took up vast amounts of modular real estate and that’s not to mention the price. There had to be a better way I thought. So here you have the second iteration of that same idea, a low cost solution for drums that won’t break the bank or take up too much room in your case (ok we’ve used a little more space this time). 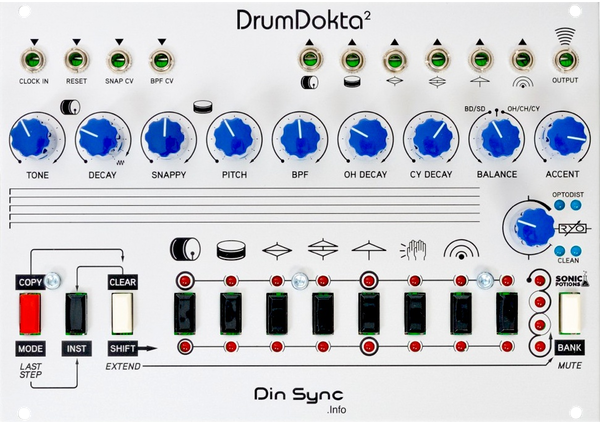