Quad function generator with built in randomisation of rise and fall times.

Inspired and officially licensed from Teia’s Stochastic Function Generator which was introduced in 2013 but is no longer available. We used the concept of the early version but completely rebuilt and reprogrammed it’s mcu to a fully featured 4 voice 2 stage envelope and slew generator.
This new module + expansion is our take on a different envelope/slew generator. It’s a fully featured Quad Analogue

Core Envelope Generator and Slew Processor with digital control which also incorporates built in random generators to control the Rise and Fall times.
Covering the full range from short sharp notes to long slow sweeps of up to 6 minutes. Together with the random generators it excels when used for drone soundscapes.
Used as a Slew Processor the random generators act as dynamic modulation sources affecting the rise and fall slew speed.
Fully featured outputs act as encouragement to self-patching creating interdependent envelopes acting in sync.
FEATURES:
Four independent Rise / Fall generators with individual timing controls.
Built in random generators for Rise and Fall Time each with Minimum and Maximum controls.
Three gate/trigger outputs per channel: End of Rise, End of Fall plus the standard Rise Gate output.
Two extra CV outputs with the Sum and the Average of all 4 voices cv outputs.
Four trigger inputs for the random engine.*
Four CV random outputs from the random engine.*
Dedicated attenuverters for amplitude and offset of each voice CV output. No more need for external attenuators, offsets and inverters.
* Available through the Expansion Module. 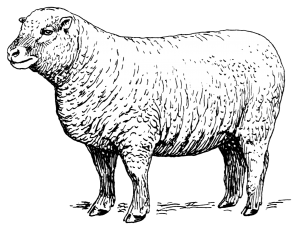 TRIGGER + LOOP MODE
Using it in [Trigger + Loop] mode creates a triangle LFO type output.
In fast speed setting this mode can go into audio range and up to 1Khz.
ONE SHOT MODE
Using it in One Shot Mode makes it a standard trigger/gate dependent envelope.
Whenever a trigger is received it will trigger the envelope to go through its 2 stages. Whenever a gate is received it will trigger the Rise stage of the envelope and stop at the maximum range until the gate is removed, after the gate goes down the envelope will enter the Fall stage.
SLEW MODE
Using it in Slew Mode makes it behave like an envelope follower for CV. Any CV input going in will be lagged according to the [Rise] and [Fall] settings. Every time the CV input goes up it’s lagged by the [Rise] settings, if the CV input goes down then the [Fall] controls will determine its lag.
This mode is very effective to generate Portamento/Glide effects from an incoming quantized source.
SELF PATCHING
You can self patch the module so that the envelopes trigger each other generating a cascading behaviour.

Offset can as a maximum range of 20v peak to peak and allows to offset the CV to ±10v. 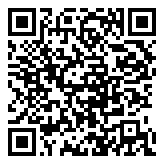 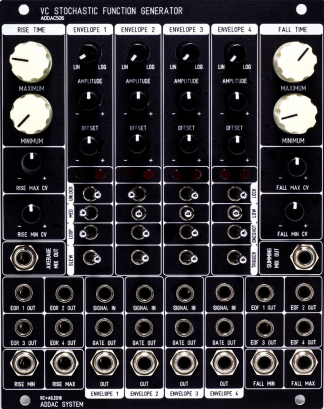