Written by
simonjones
Posted in
Blog

What a great day we had. We must extend huge thanks to the people who helped make it special (everyone!) namely Our performers;  Somatic Responses, VCOADSR & Adam John Williams and also the amazing Nick Batt of SonicState who tirelessly brings us all up to date with electronic music news from around the globe, and helped us enormously with video coverage and promotion. Thanks also go to Allan J Hall of AJHSynth, Dan, Rhys and David from Roland Aira and Jim from Entrospec for bringing their kit for us to look at.

We met some old friends, made some new ones and just generally revelled in synthiness all day long ?

We were very kindly supported by Vermona and Expert Sleepers by way of module competition prizes!

Our evening performances were a really interesting mix.

First up was Somatic Responses. Two brothers from Ammanford, West Wales who’re proud to have been producing “Techno since 1994”. I read the Chemical brothers saying they’d been together “longer than a lot of marriages” (!) and I think Somatics could say the same. Inevitably, there

is Eurorack involved in this electronic duo’s setup. John has a 9u case dominated by Makenoise modules, whereas Paul’s setup is more modest in terms of the ‘crack at the moment, with a Pittsburgh 10.1 system. The two bros each have a Moog sub Phatty for ‘musical’ input and control.

I was reminded of Boards of Canada when their set developed, in a haunting, unsettling way. I had prearranged with John that they wouldn’t do their 250bpm noisecore set, so as not to upset Chapter’s neighbours and get us banned next year ?

Second, we had Adam John Williams, a local lad no less. Adam grew up in Penarth, just outside Cardiff, but now lives in London. Adam is a performer, composer, inventor and all round technologist. He currently works for Music Tech Fest.

To round off the amazing day in the most elitist modular manner, we were lucky enough to have the hardcore modular-only performer from Brighton, VCOADSR. One man and a box of electronics in perfect harmony. Swathed in thick Walnut sculpted by Ross Lamond, VCOADSR’s Eurorack live setup box is a highly evolved and tightly honed creation from the brain of Phil Bilsby.

During  VCOADSR’s live set at Cymru Beats, it was as if Phil and his box creation became the same entity – as one for 30 minutes. At the end of the set, Phil withdrew from the machine, sweating, drained and exhausted. 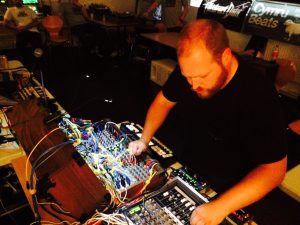 We got home exhausted after a very busy but great day of Electronic music experience, and woke up the next day with a feeling of contentment and achievement. The Cymru Beats event will definitely become an annual event and we’re already looking forward to the next one!