The most complex modulator is you. The Planar 2 puts macro control over six outputs—including a quad panning mixer—into your hands with a buttery smooth joystick. Record up to 30 seconds of your own movements, stretch it or mangle it with scan mode, use a trigger for playback, or just loop it—synced or not. Add yourself to your patch.

A Cornucopia of Control

With its smoothly responsive precision joystick, Planar2 facilitates hands-on vector control of two entirely independent sets of outputs (quadrants A-D, and axis X/Y), plus the ability to capture and playback your gestures. Recording your joystick movements enables the creation of organic and complex envelopes, wild and wobbly LFOs, or extended sonic evolutions. It mixes, morphs, routes and pans audio inputs; triggers gates; outputs control voltages and is itself, CV-controllable. Planar2 puts the ‘joy’ back in ‘joystick,’ and the ‘fun’ back in ‘function generator.’ Its multitasking and tactile interface makes it a flexible and unique control device, no matter what your musical genre. 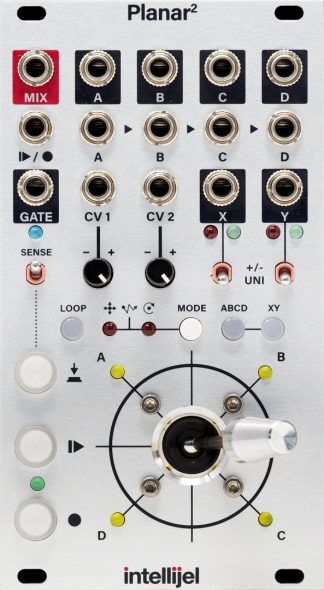